Well, the long summer is over and the autumn storms are lining up in the Atlantic! As you will probably be aware from media reports, this year has been extremely challenging for our farmers. The winter wheat crop had the ‘Beast from the East’ to struggle through which meant a delay in the growing season in March / April and then after a great deal of rain was plunged into drought which for East Anglia farms started in early May. The spring wheat crop (usually planted in March) was delayed in terms of planting because the ground was so wet, then once farmers had the crop in the ground which for many was later in April, the drought started and the crops had no real rain to establish themselves. The net result of all this is that organic wheat yields are generally down 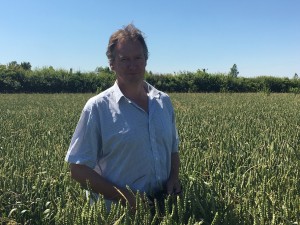 and protein levels are lower than in previous years.

As usual, we’ve been taking samples of wheat from our regional organic farming partners and test milling and baking to see which parcels of wheat are going to provide you, our customers with the best possible wholemeal and white wheat flours. We are pleased to announce that for the 2018 harvest, we will be taking wheat from Stephen Parsley who farms at Red House Farm near Wood Walton, Huntingdon.

The picture shows Stephen amongst his 2018 crop of Mulika wheat  which you will be eating from early October!

We will launch a product update video in early October to explain more about the qualities of this new flour.

Keep up to date with the latest news at Priors Flour

We treat your email address with the utmost respect. We promise we will never spam you or sell your details on.

Cambridgeshire is the land of windmills! Here we s

Whilst Black Swann events were ruling the carriage

Maintenance time again! The fantail frame has had

For 23 years we’ve struggled with next to no ele

“Oi.. your on my perch… na mate that’s yours